In 1969 the Governor of Noranside Borstal Institution, Charles Hills, undertook a project in Wester Ross for the National Trust for Scotland. They were offered excellent camp accommodation at the RN Boom Defence Depot at Aultbea. MurtleHouse, a Camphill residential school near Aberdeen, was invited to share the camp with them.  That summer, a group of Borstal trainees and staff spent 14 days at Aultbea, together with a group of children, who were in need of special care, and staff from their school.

It soon became obvious that there was not a division of givers and receivers in this setting……there was mutual benefit. The children needed supervision, care and attention and the Borstal trainees needed to accept responsibility for others who were more vulnerable than themselves. Barriers were quickly broken down and each individual was recognised as having something to offer the group.

A young child’s refreshing lack of inhibition, a young person’s hidden sense of humour and an adult offender’s physical strength to push or carry his wheelchair-bound friend. The Borstal boys gained such a lot of self-respect and a feeling of need from the children, and from this project the Six Circle Group was born.

At the end of the camp Charles was presented with 6 rings from the Boom Defence Net as a souvenir. The interlinking of the rings then formed the logo of the organisation, representing the motto:

“In meeting the needs of others, we meet the needs in ourselves” 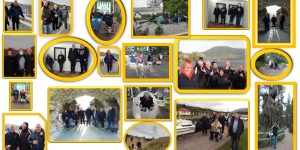 September – what a month we have had, making sure that we are continuing to follow government guidelines, we have managed to get more of our service users together, which, for some has stretched their comfort zones, for some these have made them realise how much they have missed social interactions.  Below is just some […]